Yagama's interest in creating comprehensive environments and transformative art has inspired her to conceptualize and organize various public art and event decorations projects. Many of these projects were carried out with the collective efforts of the Uga Buga art collective, of which Yagama was the founder and main driving force.
Uga Buga art collective is formed to enable the creation of ecologically sensitive comprehensive mixed media works inspired by the diversity of human culture and the search of Truth through experience.
LABYRINTH GARDEN project, park "Geo Milev" Sofia, planted in October 2008, 710 sq. m..
Based on an ancient Cretan labyrinth 3-turn pattern, this garden labyrinth was planted with the support of Sofia Slatina Municipality and MIM Bulgaria. 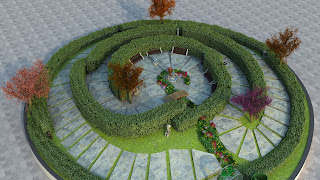 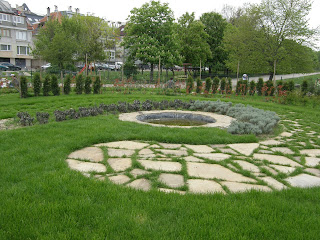 Labyrinths are ancient structures and their shape carries a lot of symbolic significance, just as walking through a labyrinth echoes the human passage through different internal and internal stages. Labyrinths have been used since time immemorial for initiations and rites of passage, and continue to be used for healing, meditation or relaxation. The experience of walking through the labyrinth involves turning around in a circle, seemingly lost, but moving towards the center - one can never get lost in a labyrinth, there is only one way-to get found. The Labyrinth in Geo Milev Park was conceived also as a herb garden in collaboration with Ayranov architects, and plants in it include mint, salvia, lavender, ginkgo biloba, Japanese cherries. It's walls will eventually reach a height of up to 3 meters and in the center there is a small wishing pond with water, symbolizing universal Love. The little garden is already a favorite place for mothers and their children to relax and have picnics on sunny days. More info (in Bulgarian) at http://projectlabyrinth-bg.org. 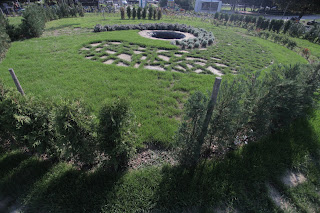 MEDIA/INTERACTIVE INSTALLATIONS:
Recently, Yagama has created several interactive installations.
VISION/SOUND 2 part interactive installation, VISION by Yagama SOUND by Kliment Dichev and M. Stoyanov, part of SPACE OF PERCEPTIONS project (L. Rounevska, J. Cholakova, K. Dichev, V. Vitanova, S Genadiev, Yagama, M. Stoyanov), Vaska Emanuilova Gallery, June 2009, supported by the Culture Fund.
SPACE OF PERCEPTIONS focused around the ways in which we can modulate our perceptions to redefine reality.
VISION was a space in which the visitor could modulate the real time superimposed images of himself projected with a delay by using a wii remote control. Analogically, the sound produced in the SOUND room was played live and modulated using the same system.
VIOLET FREQUENCY, Sofia Underground Festival, May 2008, supported by http://www.robotev.com
Interactive audio/light installation using Arduino and PureData based on the idea of brainwave synchronization. It involved 10 glow-in-the-dark hands on a wall, with buttons underneath them connected via the Arduino board controller to a Pure Data patch. When a visitor pressed a hand, an isochronic tone* between 8 and 14 hz (the dominant frequency in which most peopleʼs brains vibrate while in a normal awakened state) was generated, or a lamp blinked in a frequency between 8 and 14 HZ ( that means between 8 and 14 times a second). Every hand was assigned a specific frequency, sound or light. The idea was to introduce people to the concept of brainwave synchronization in a playful and interactive way that involves their full control of the experience - when one stopped pressing a hand, the sound/light also stopped.
* isochronic tone - a type of brainwave entrainment (synchronization) using a pulsing audio tone, the number of pulses per second corresponds to the frequency to which the brain is being synchronised.
SQUAT  Sept. 2008, Water Tower Art Fest, Water Tower, Lozenets, Sofia.
SQUAT was a installation devised to introduce Bulgarians to the concept of squatting, by "squatting" the top floor of the Water Tower, installing a mock copy of the Bulgarian state law newspaper with a "new law on squatting" making it legal and listing the requirements of a squatted building to contain TV, bed, chair and toothbrush. The visitors could relax in the space and flick through the "channels" on the TV installed, using a wii, through mock news footage about the Water Tower being squatted and documentary footage by Yagama from the process of squatting a building in London.


LABYRINTH OF THE MOTHER, Existence Festival Spain, concept by Yagama, created by Uga Buga (Yagama and R. Mitrova)
In 2006-07 Uga Buga were invited to do a labyrinth at Existence Festival, Spain. They created a big (1300 sq. m.) labyrinth based on an ancient "Mother" labyrinth, which has a very feminine shape, 8 turns, and 2 points of entrance/exit. The Labyrinth was constructed of traditional labyrinth material-stone, much of it carried by hand, and reused UV-reactive lycra, which made the labyrinth glow at dusk. In the center there was a Wishing Tree, constructed of tree cutoffs (from the forestry department in the area), which people hung all types of objects on to symbolize their wishes… hopefully they all came true :) 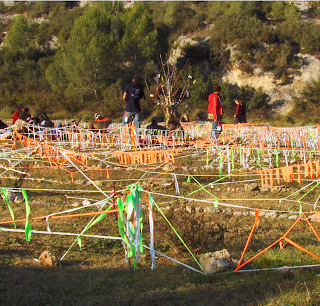 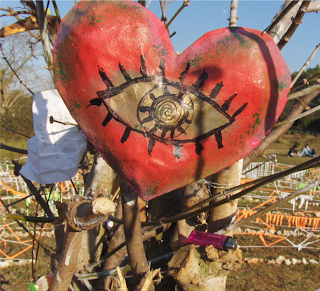 GUARDIAN DJINNE Project,Rhythms of Peace Festival, concept and artistic direction by Yagama, created by Uga Buga (Yagama, Rozaliya Mitrova + lovely international crew of helpers) Marocco, near Asilah; 2006
Djinne are beings from Arab mythology, created from fire, unlike the humans, which were created from earth. They can be dangerous for human beings or helpful and under control, like some of the Djinne in the 1001 Nights. The project involved building five 4-meter high sculptures mostly with material found on site, human waste left on the beach with every high Atlantic tide. Each Djinne has a dominant color and corresponded to one of the five elements - Air, Water, Fire, Earth and Aether. 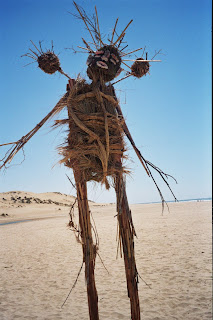 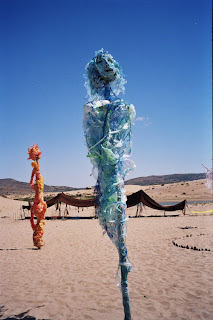 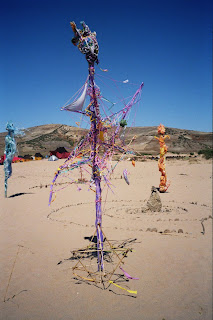 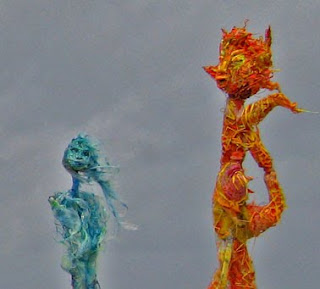 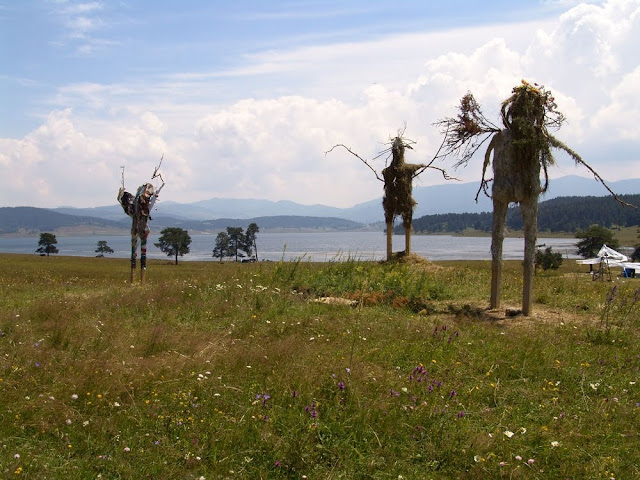 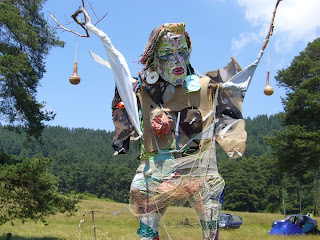 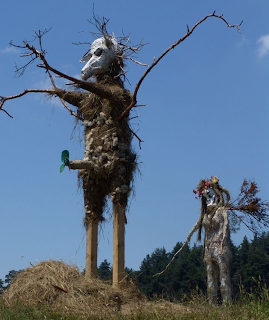 PLASTICBAG EARTH installation/performance, part of "THE LIFE OF A PLASTIC BAG" film by journalist Gena Traikova, broadcast several times on national BTV channel, Bulgaria, November 2007. By Uga Buga (Yagama, R. Mitrova, Y. Hadjikostova)
Uga Buga were approached by journalist Gena Traikova for collaboration with her on her documentary film, which aimed to expose the shortcomings of Bulgaria's promises to make a transition to a greener economy, focusing on the issue of recycling and more specifically the ubiquitous plastic bag. The idea was to raise public awareness and debate on the issues of plastic bag pollution. The performance involved three plastic-bag clad people tying bits of plastic bags all over a children's playground climbing model of the globe until it turned into a plastic bag Earth. 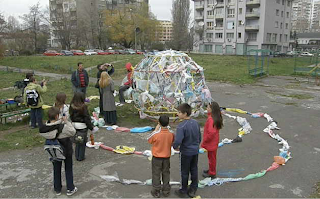 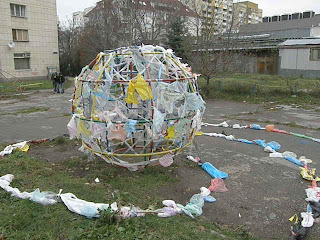 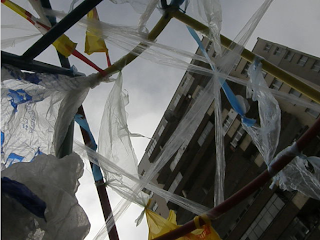 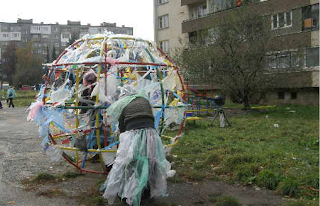 SET DESIGN for festivals
Yagama has collaborated on the set design/deco and overall visual concept of many festivals and parties, including Artmospheric Festival, Bulgaria, Existence Festival, Spain, Rhythms of Peace Festival Marocco, Freerotation Festival 2010, UK, many parties in various clubs around Europe.